10MW-scale solar power generation system will be constructed in the neighboring site of the Taishir Hydropower Plant. The electricity generated will be sold to the national grid (Uliastai Altai grid) assisting the Feed-in-Tariff (FIT) scheme. This solar power project will contribute to an urgent issue of stable power supply in conjunction with the shortage of expected power generation outputs from the 11MW Taishir hydropower, mitigation of GHG emissions, and abatement of serious air pollution. 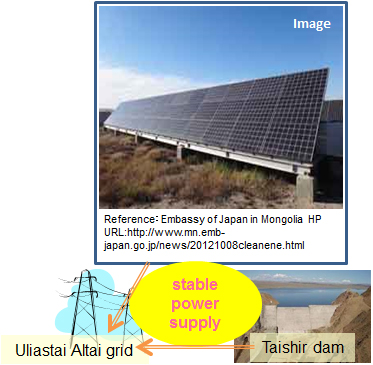 The project is located in Gobi-Altai aimag Taishir Soum. The solar power system will generate power for the Uliastai-Altai grid, which has been also connecting to the 11MW Taishir Hydropower Plant since 2008.
Implementation of the solar power system is expected to provide further stable power to the region.